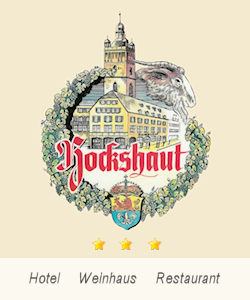 Conveniently located in Darmstadt’s pedestrian zone, we are proud to have received the “Historical German Hostelry Prize” by the German government as recognition for our historical and cultural role in Darmstadt.

Our classic German hostelry was founded as a presbytery in 1580 and used as a tannery from 1760. In 1795 it was transformed into a wine tavern and restaurant and the emblem of the guild, the skin of a male goat (Bockshaut) was chosen as the name for our tavern.

Today our hotel offers classic rooms and our historic restaurant a wide range of local and traditional German dishes.

The Bockshaut is the only restaurant in the State of Hessen to receive the „Historical German Hostelry Prize“ from the German gouvernment.

For the German government, it is an absolute necessity to preserve original and traditional hostelries. They play a social role, as well as a cultural role and can be linked to the history of Darmstadt and Germany.

The prize has been awarded to Reiner Heiss, owner of the Bockshaut, in a public award ceremony.

We are happy to inform you that we have been given the honor of receiving the „Historical German Hostelries Prize“. It is the oldest hostelry in Darmstadt; it is an institution of the city, respresenting the history of the house, the city and its inhabitants.

You will only find German food, beer and wine on the menu. We use only fresh produce of the region. In addition to the restaurant with beer garden and various rooms, the Bockshaut has a 3-star hotel.

The year 2010 will be a Jubilee Year for us, under the star of the „German Hostelries Award“.

We would be pleased if you joined us to celebrate this event.